Featuring behind the scenes stories that created Saturday Morning TV! 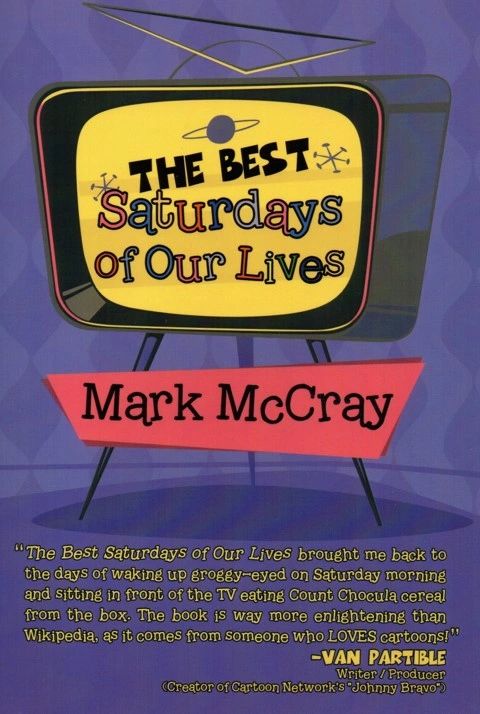 Just click on the book image below to order your signed copy!

The Best Saturdays of our Lives

The Best Saturdays Of Our Lives was a monthly Newsletter that was originally published from 1992 To 1996 and was circulated on a monthly basis to a list of Animation and Television Executives, Networks, Studios, And Comic Book Publishers. The Newsletters have been compiled in this new edition and chronicles the origins of Competitive Saturday Morning Programming from the "Big Bang" of the 1966-67 Season Through the Programming Of the 1990s.

Mark McCray is an award-winning television writer who has been in the broadcasting industry for over 20 years. He has a passion for animation, television programming strategy and comic books. McCray is also the author of The Best Saturdays of Our Lives, a book that chronicles the origins of competitive Saturday morning animated programming. In addition, Mark McCray is the host of The Best Saturdays of our Lives Podcast along with cohost Dan Klink. McCray has been interviewed on Gilbert Gottfried’s Amazing Colossal Podcast, and was invited as a guest co-host by TCM to be part of the 100-year anniversary and tribute to the Max Fleischer Animation Studio. Prior to his work as an author and podcaster, Mark McCray was the senior manager of Programming Operations for Adult Swim overseeing Adult Swim’s on-air promotions and scheduling strategy. McCray also worked as a television programmer for Cartoon Network, and was a key member of the team that launched the Boomerang Network. Follow Mark McCray on Twitter: @ MarkMcTBSOOL

A DAY IN THE LIFE!

As a special Guest Star at the 2022 TCM Film Festival, I had my 1st Hollywood Red Carpet moment event to celebrate the 20th Anniversary of the

The 2022 TCM Film Festival where I presented Looney Tunes in Hollywood Presentation!

The 2022 TCM Film Festival where I presented Looney Tunes in Hollywood Presentation!

2019 Guest appearance at the SCAD AnimationFest where I discussed the 10th Anniversary of The Princess & The Frog and Disney Animation Innovations.

Being flanked by talented actors  Nyambi Nyambi and Alphonso McAuley who bought copies of my book.

Meeting up with my friend and fellow author Aaron Michael Hall at Jordan Con!

I kicked off the SCAD Animation  Show where I educated the students on the history of "animation on a shoe-sting budget" which featured  refreshed animation clips.

Hanging out with my buddy Greg Teft at Treklanta where I presented a Star Trek animated panel.

Lecturing on the topic of "animation on a shoe-string budget" to the  "History of Animation" class at SCAD.

Meeting Karyn Parson at the 2015 BronzeLens Event for her animated production of "The Journey of Henry Box Brown."

Hanging out with Tommy Davidson  who was at San Diego Comic Con promoting "Black Dynamite" where he voices the role of  "Cream Corn!"

THE BEST SATURDAYS OF OUR LIVES PODCAST!

Running a holiday sale or weekly special? Definitely promote it here to get customers excited about getting a sweet deal.

Big Thanks to Zach White and Matt Hutchinson for inviting as a guest star on Adult Swim's Swap Shop! We had a blast!

I had a blast giving a tour of the Adult Swim Offices with The ThunderTalk crew!

Dan Parent is the co-creator of The Carney's Comic book that I talk about in my book, The Best Saturdays of our Lives.

Bill Gollier is the co-creator of The Carney's Comic book that I talk about in my book, The Best Saturdays of our Lives.

One of the nicest people on the planet who was mentored by animation great Walter Lanz. Check out his interview on our podcast available on soundcloud.com

Mike Farber and Michael Gordon host the Earth Station One Podcast where  a multitude of awesome topics are covered (I also make guest appearances as well)!

I sent a fan letter to the Shazam series and received an autographed pictured of the Shazam cast.

Time Out with TaLynn Kel

​​​​​​​I  had the pleasure of writing The Influence of Star Trek: The Animated Series and partnering with Kyle Sullivan who is the creator and producer of  Trekspertise  to bring this episode of  Trekspertise to life.  Check it out and enjoy!

The Adult Swim Interview reveals the origins of the my career from Programming on Boomerang and Cartoon Networks to overseeing the Promo and Packaging strategy for Adult Swim Linear and Non-Linear Networks!

When a young, aspirational superhero loses his powers, Rudolph St. Clair has resigned himself to civilian living. The former hero moves his family into the perfect brownstone apartment. Rudolph soon finds out that the apartment is haunted, and he would have to fight for his survival to solve the mystery of The Paper Boy: Dimensional Adventures.

Copyright © 2022 The Best Saturdays of our Lives - All Rights Reserved.

Welcome to the Best Saturdays of our Lives Website!

Welcome! Check out my new announcement.